One of the more interesting aspects of cryptocurrency is that it has enabled a whole new class of criminals who have never been known to exist. These are hackers, or scammers as they are commonly referred to in the crypto world. This particular scam involves an Indian Prime Minister’s Twitter account being hacked by Bitcoin (BTC) scammers 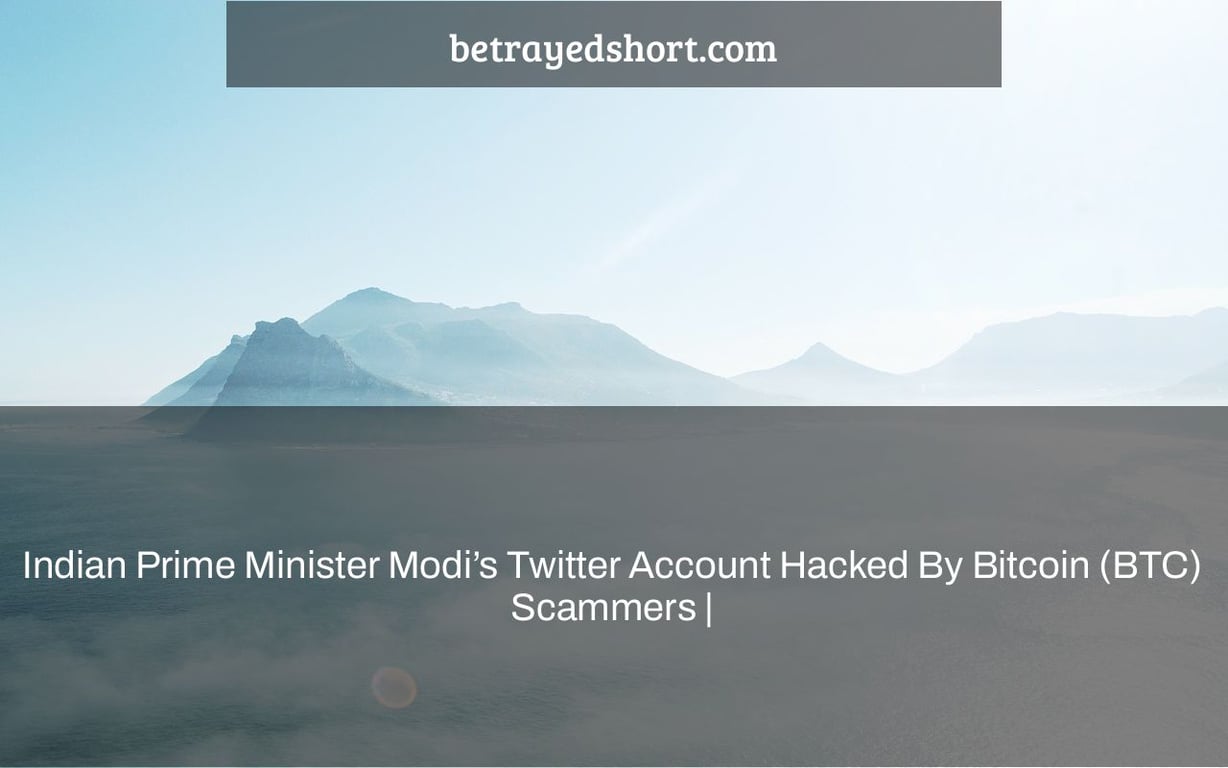 Indian Prime Minister Narendra Modi’s Twitter account was hacked by scammers. The account has over 73 million followers and pushed a well-known bitcoin fraud that has harmed thousands of people in the crypto world in recent years. Scammers proclaimed Bitcoin legal tender and asked people to access a fraudulent link to participate in the contest.

India’s Prime Minister Narendra Modi’s Twitter account was hijacked. India has officially recognized Bitcoin as legal cash, according to a bunch of Bitcoin fraudsters who posted using the Prime Minister’s account. The government had also acquired 500 bitcoins, which it was giving to all citizens of the nation, according to the tweet.

“Bitcoin has been declared legal currency in India.” The government has purchased 500 BTC and is giving them to all nation inhabitants. “Today is the day of the future!” 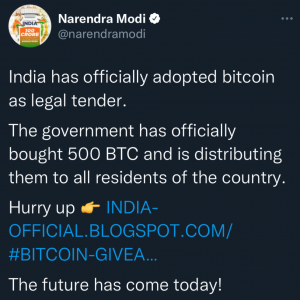 If they wanted to get their Bitcoin, they had to sign up via a link posted by the Indian Prime Minister’s official Twitter account. This is a pretty prevalent fraud that has gained a lot of traction in recent years all around the globe. Even though Twitter is currently more secure than it was before, these things may still happen.

Remember that a few years ago, well-known Twitter accounts were established to imitate other celebrities. They marketed cryptocurrency-related schemes that claimed to double customers’ digital coins once they had a significant number of members. Of course, everything was a hoax, but thousands of people were duped.

Another issue that crypto Twitter faced was genuine accounts being hacked, like as Narendra Modi’s. Despite the recent incident involving India’s Prime Minister, this was handled by Twitter, and things are now calmer.

Over the past several years, India has attempted to regulate and manage cryptocurrencies. Several suggestions have been made to limit the usage of virtual currencies, while others have advocated for more crypto acceptance in the nation. The fact is that there are no clear laws in India, and the nation seems to have no notion where it wants to go in terms of digital currency legislation in the next years.