Ray Dalio, the billionaire founder of Bridgewater Associates and author of Principles: Life and Work, has advised people to allocate 1%–2% of their net worth in bitcoin. He says cryptocurrencies are a “good store” for risk capital because they represent an asset that is now uncorrelated with other assets—meaning it doesn’t correlate well with stocks or bonds because there’s nothing to correlate against. This makes them more stable than other investments.

Billionaire Ray Dalio has recommended that people allocate a “reasonable” 1%–2% of their net worth into Bitcoin. The investment firm founder believes the cryptocurrency will be a ‘long-term store of value’. 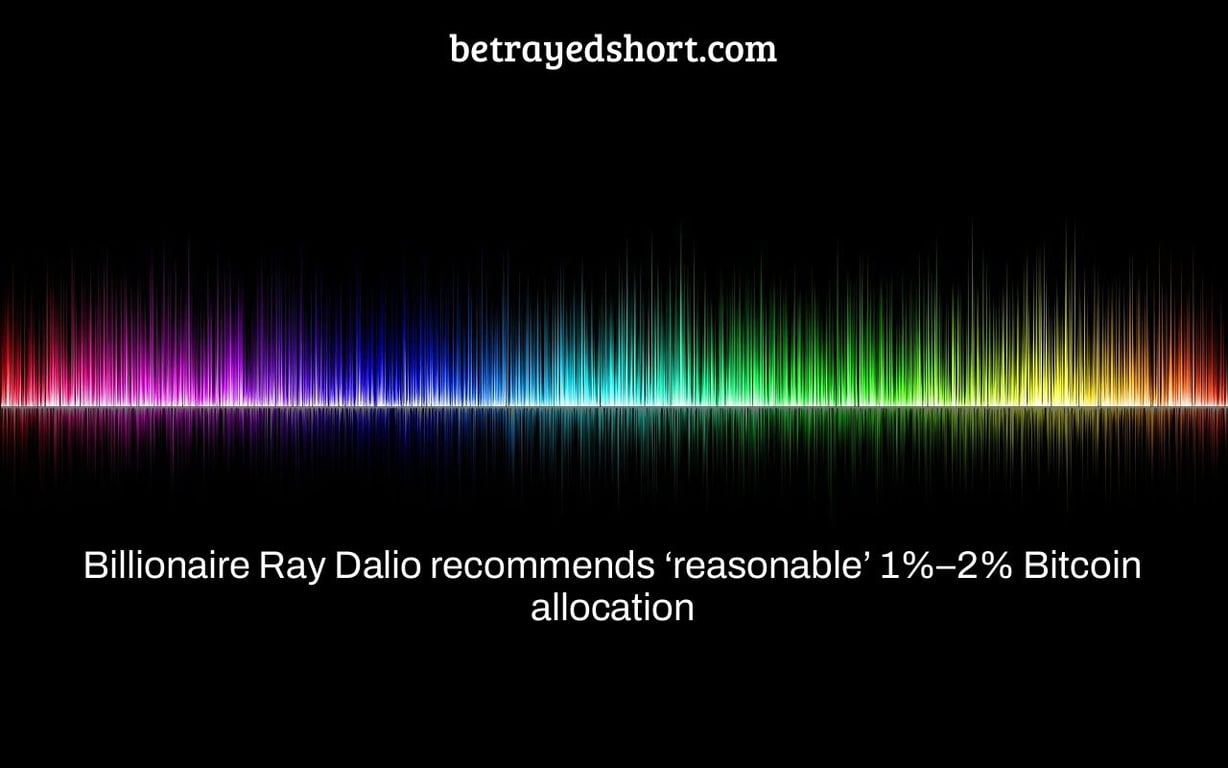 Ray Dalio, a hedge fund manager, is still positive for Bitcoin (BTC) in 2022, citing three fundamental reasons why the cryptocurrency is “outstanding.” He mentioned gold and Bitcoin as inflation hedges in a recent discussion with The Investors Podcast.

When asked by interviewer William Green what a reasonable allocation for a layman would be, Dalio responded he agreed with fellow billionaire Bill Miller’s recommendation of 1%–2%.

He went on to say that the network has never been hacked, that it has no superior competition, and that BTC adoption rates indicate that it might continue to eat into gold’s market capitalization:

“At the moment, Bitcoin is worth roughly $1 trillion, whereas gold that isn’t kept by central banks and isn’t used for jewelry is worth about $5 trillion.” When I consider it, I keep that in mind since I believe inflation hedge assets will perform better over time.”

During a recent interview with the podcast, Dalio, the founder of the world’s biggest hedge fund, Bridgewater Associates, reiterated statements made last year, stating he was amazed that Bitcoin had lasted the previous decade while reaffirming that he is “not friendly to cash.”

According to BTC Markets, there is a Bitcoin explosion among Baby Boomers.

Dalio did qualify his comments on Bitcoin’s ascent, pointing to the zealotry surrounding the Bitcoin movement as a potential Achilles heel, and, as one would expect from “Mister Diversification,” he also raised a larger question about digital assets:

“When does someone collect, take the money they earned in Bitcoin, and diversify it by moving on to other things?”

He waxed eloquent on nonfungible tokens and other currencies as diversification options. BTC, on the other hand, is now included in his “inflation hedge asset class,” with gold.

Ray Dalio is a billionaire investor who has been recommended to allocate 1%–2% of your portfolio in Bitcoin. Reference: ray dalio investment advice.